Oculus Announces $28,000 In Prizes On Brass Tactics As A Part Of Their 2 Year Anniversary Event 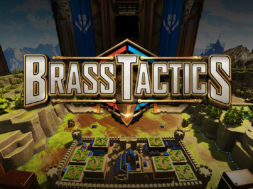 Oculus Announces $28,000 In Prizes On Brass Tactics As A Part Of Their 2 Year Anniversary Event

As a part of Oculus’s second anniversary event, the company has announced a cool prize tournament through Brass Tactics on Saturday, March 31st that will give you a chance at $28,000 in prizes.

The $28K prize pool includes store credits, a brand-new PC, and the exclusive “Golden Account” that unlocks 100 VR games on the Oculus Rift.! They’ll kick things off tomorrow with a Brass Tactics free weekend. The event itself is called the Rift Gold Rush event and will kick off between 1PM – 2PM PST on March 31st.

For those of you unfamiliar with the game, Brass Tactics is a living tabletop battlefield where you get to command dozens of units and take over the enemy’s territory in a game that redefines how an RTS can perform through VR. Users will be able to move the table to adjust your perspective and dive into the action, directing your army with both hands, all while seeing and hearing your opponent’s avatar across the table.

Brass Tactics will be available to play for free this weekend. No purchase of the game will be necessary. You can join the free weekend of Brass Tactics starting March 29th.

All disputes will be resolved solely by binding arbitration int he United States of America and Entrants waive the ability to bring claims in a class action format.

It looks as though that Oculus might also plan to hold this new event on April 7th and April 14th but it is not officially confirmed.