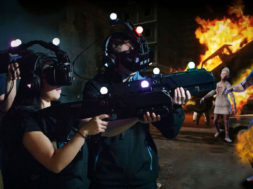 Octane Raceway is a diversified play place in Scottsdale, Arizona known for its extreme kart racing track and other forms of entertainment. Recently, the company has announced that it’ll be adding an additional facility for entertainment with the first free-roam virtual gaming arena called Velocity VR.

The Velocity VR attraction is powered by Zero Latency and will feature an open 3,500 square-foot space at the raceway’s 65,000 square-foot attraction. Octance has spent $800,000 in developing this new free-roam VR arena, which they believe will be the future for attraction.

“Octane Raceway is committed to the most exciting and immersive experiences for our customers that leave them awestruck and wanting more,” said Scott Sanders, CEO of Octane Raceway. “Velocity VR falls in line with that commitment, and will truly be a unique and memorable attraction,”

Velocity VR will have no physical walls or obstacles within the play area, which means players have complete maneuverability to walk, explore, and fight their way through virtual terrains.  Games will be 15 minutes in length and will be geared for players ages 13 and older according to the company.

The first theme for the new arena will be “Survival.” Players will be transported in teams of up to six players into the middle of a zombie outbreak. The VR players will work together to build barriers, fight off the undead and hold position until the extraction team arrives. “The game will require teamwork, but the player with the most points will come out on top. Additional games will be added later this year,” said Octane Raceways.

The unique Velocity VR experience will cost $40 on weekdays and $45 on the weekend. Octance Raceways is open 365 days a year to the general public. If you’re wanting to shoot up a horde of zombies like you do in Call of Duty games, definitely visit Octane Raceways on Memorial Day. Stay up-to-date on scheduling on their website.