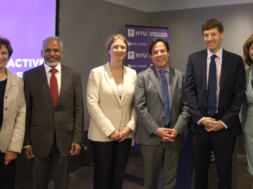 New York City and the Mayor’s Office of Media and Entertainment has announced that they’ve invested $6 million into opening the first VR/AR hub on the East Coast. This is the first publicly-funded VR/AR lab in the country which will be hosted at NYU’s Tandon School of Engineering.

“Through targeted investments, NYCEDC is committed to growing nascent industries into major job creators for our city. The VR/AR sector is expanding rapidly, and New York City is well-positioned to become a global leader in this fast-moving field,” said NYCEDC President Maria Torres-Springer. “The first publicly-funded VR/AR lab will support growth-stage companies and serve as a hub for the City’s VR/AR industry to make success in this sector more accessible for more New Yorkers.”

There were several institutions that were fighting for the honorable spot in hosting the VR/AR hub but NYU has won out as the university to be home to the new space. The university currently has several VR projects and startups at their institution. The Mayor’s office believes that the hub will be able to generate 500 jobs within the next ten years.

“Augmented and Virtual Reality represents a huge new industry, and we want New York City to be second to none. We’re investing in the space, the talent and the research needed to make New York the global hub for this emerging technology. This is a significant piece of our strategy to spur 100,000 good-paying jobs in 10 years – and particularly in creative and entrepreneurial sectors that speak to our City’s current and future generations. Equal opportunity and access, through education and job training, is the bedrock of our jobs strategy, and together we will continue to rise,” said Mayor Bill de Blasio.

The Mayor’s Office has plans on taking up an astounding 15,000 SQ FT at the Brooklyn Navy Yard for the new VR/AR hub. They also want New York City to be the global leader in the emerging VR/AR industry. The lab will serve to grow these core functions:

Do you believe New York can become the hub for VR and AR technology going into the future?