We’ve all experienced what bad VR content can do to you as far as being sick. I know I’ve had my fair share where I felt nauseous, dizzy, and sick with a subtle headache. It’s like catching a real life virus. To deter and monitor good VR content from bad, Nvidia will be releasing FCAT VR. This is a new frame capture analysis tool for virtual reality, which will helps VR developers and enthusiasts analyze performance in VR content.

There are traditional performance indicators such as FRAPS, which measures what’s happening on a desktop monitor. It, however, fails to measure what’s happening inside the VR headset. FRAPS solely focuses on frame rate. There is no measurement of stutter, hitching, or latency, which plays a pivotal role in a VR experience.

“FCAT VR will take the guesswork out of VR performance testing with an object, data-based process,” according to Nvidia. “FCAT VR builds on this to provide comprehensive performance measurement for frame time and stutter on the VR headset without the need for special external capture hardware. The tool supports both Oculus Rift and HTC Vive.”

Rendering in VR is a lot more different and intricate versus standard rendering processes. For example, the GPU has to render at a higher resolution for VR than traditional content. Quality VR experiences require high and consistent frame rate with low latency between head motion and display output. Additionally, frames in VR content must be pre-distorted in order to offset the effect of looking at a display through an optical lens inside the VR headsets. 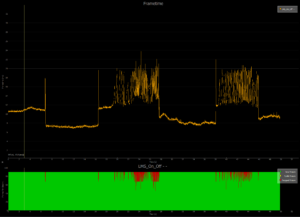 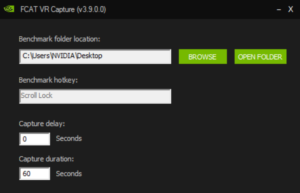 There will be two parts to FCAT VR. FCAT VR Capture will capture the detailed performance metrics without the need for specialized capture hardware. FCAT VR Analyzer will be providing the data in an easy-to-read graphical user interface. The tools will be available to download starting mid-march.