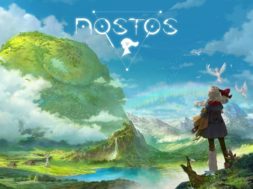 Set in a post-apocalyptic world, Nostos will allow you to adventure a world with breathtaking views at every corner. Inspired by anime style drawings, players can explore the mysterious world around them as it nears the end of its days.

The world of Nostos

Players will explore the vast and desolate world of Nostos where the remnants of civilization remain and, though its cities are long abandoned, the relics they leave behind may be the key to thwarting extinction for the survivors, who face new dangers as the limited resources dwindle.

While exploring the mysterious ruins of Nostos across deserts, grasslands, mountains and more, players must survive its increasingly inhospitable climates and fierce enemies. But time is limited, for scattered throughout these lands are the dangerous and ever-expanding “Coralsea”, encroaching and threatening the very lands on which the people depend on for survival. Teamwork is key as players gather resources, build a clan they can trust, and fight to pull the world of Nostos back from the brink of utter desolation.

Leveraging Improbable’s SpatialOS simulation technology, the world of Nostos will have players adventuring through a massive seamless open world as they face unexpected meteorological phenomena, build new wonders and encounter intense combat, all hot on the heels of the apocalypse.

While there isn’t a set release date for Nostos, attendees at Gamescom 2018 were able to play the VR game at the expo. This means that there is an early working model of the game and that this will come to fruition in the near future.

The game definitely reminds us of some of our favorite anime such as Sword Art Online and the Fate series.