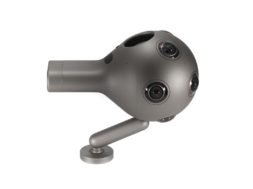 Nokia has announced that they will halt development on their OZO 360 camera and hardware. This will lead to 310 jobs lost out of the roughly 1090 employees in Nokia Technologies. The company stated that they will maintain commitments to existing customers but is very vague on that terminology.

“Nokia Technologies is at a point where, with the right focus and investments, we can meaningfully grow our footprint in the digital health market, and we must seize that opportunity,” said Gregory Lee, president of Nokia Technologies. “While necessary, the changes will also affect our employees, and as a responsible company we are committed to providing the needed support to those affected.”

Nokia launched the OZO camera roughly 2 years ago at a staggering price point of $60,000. They soon reduced that price to $45,000. This is was one of the high-end options available for professional photographers and videographers interested in shooting 360 videos.

“In digital media, the slower-than-expected development of the VR market means that Nokia Technologies plans to reduce investments and focus more on technology licensing opportunities,” said Nokia in their press release.

This is to of no surprise as the demand for the OZO wasn’t too high due to costs and restraints. There’s also a lot of options out there currently for high-end 360 cameras such as the Jaunt One Professional Grade VR Camera, Yi Halo 360 Camera, Kandao Obsidian S 3D VR camera, and Facebook Surround 360 Camera. Even the famous camera makers are starting to release their own 360 cameras such as Nikon, GoPro, and Samsung.