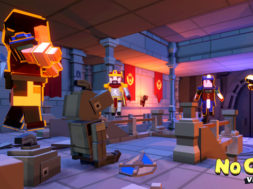 For those of you out there who miss memory games, “spot the difference,” or “what’s missing” challenges — listen up –because this game is for you. No Clue VR takes players through two scenarios, daylight and nighttime, where the player must spot “what is different” in the ever so slightly different scenes. It’s actually a lot trickier than it sounds, and definitely mentally stimulating. This game is an ultimate test of your powers of observation.

Each “difference” a player deciphers results in a score surge. The game is a race against the clock, where you must spot a certain amount of differences before time runs out! The player is allowed to switch back and forth between night and day, as the slight changes (caused by pesky ghosts who live in the VR game world) are very minimal and elusive.

The game has a “story mode” and “survival mode” as well as a ranking leaderboard, which shows you how you stack up in comparisons to the tens of thousands of gamers in the world.

In story mode, each mission has a 120 second time limit and five objects that need to be found per mission. In survival mode, players are given 300 seconds initially, with an additional twenty seconds awarded for each five differences spotted. The objective in survival mode is simply to last as long as you can.

No Clue VR was both developed and published by Elknight. It is still in its early access phase, which can be found on Steam. The full game is set to release on May 18. Elknight has commented that the they will use the feedback from the early access to improve the final version, resulting in more missions, variable objects, variable types, levels of difficulty of the game, designs of the game props, and generation algorithm of the dynamic scene.