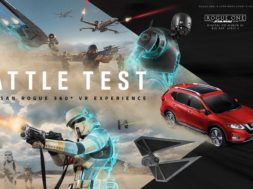 Nissan has teamed up with Lucasfilm, the Star Wars franchise, to bring the public a seriously cool new promo that will excite both Star Wars fans and VR aficionados alike. ‘Battle Test,’ the 360 VR experience lets you enter the final intergalactic battle between the Empire and the Rebellion in Rogue One: A Star Wars Story, and exit without a scratch.

The two-pronged experience is intended to celebrate tomorrow’s April 4th release of Rogue One on DVD/Blu Ray, and showcase Nissan’s Intelligent Safety Shield Technologies. The user (or Jedi Warrior, if you will) is able to stay out of harm’s way, enclosed in the safety of the Nissan Rogue, while the battle rages on outside. The immersive story throws one danger after another from every angle, yet the safety shield alerts users of the hazards surrounding the car from 360 vantage point (ironically, much like the video itself!). Battle test is a clever analogy for the real world dangers of driving, proving just how much people can miss while driving, and how this new technology could save lives.

Developed by Radical Media LLC, Battle Test was a large scale collaboration. Thanks to the involvement of Skywalker Sound and Industrial Light and Magic, the two studios who have brought visuals and sound all of the Star Wars films, the experience is extremely authentic.

“What I’m really passionate about now is working on these immersive 360 and VR experiences. I’ve worked on countless films over the last few years but for the last two years I’ve mostly been focusing on this type of work,” said Kevin Bolen, audio designer for Skywalker Sounds. “And I have to say that, by far, this is the most complex immersive 360 project that we’ve done both visually and on the sound side. It’s great that we are targeting a level of parity that we can say this is film-quality work.”

The experience is available for free on Oculus Rift, Samsung Gear VR, and HTC Vive. 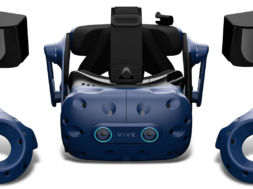