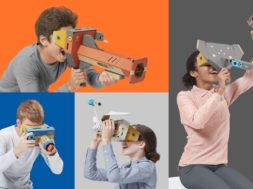 Nintendo has been hitting it out of the box recently ever since the launch of their Switch console. The company has launched many peripherals and accessories that boosts the whole ecosystem around the Switch console.

Now the company looks to take a dramatic step forward with the announcement of their Nintendo Switch VR solution. Nintendo will be launching their Labo kits which allows users to place their Switch consoles into the unique cardboard boxes.

Similar to what Google did with with the Google Cardboard HMD box, you will place the device into a paper container with optics that lets you see things in a more immersive way.

The Nintendo Switch will not have anywhere near the computing powers of a PC but it will be able to deliver simple 360 and VR solutions, which is Nintendo’s motives.

The Starter Set + Blaster kit provides an action-packed introduction to the experience. You can then add to the fun with the Expansion Sets. Or, if you want an even broader experience right away, you can purchase the full Nintendo Labo VR Kit, which features six VR Toy-Con projects in one package.”

The Nintendo Switch VR kit will be available starting on April 12th and you can check out the variety in sets on their Labo site. There will be 4 sets in total to choose from which comes with a variety of designs and looks. Price point is not yet available.