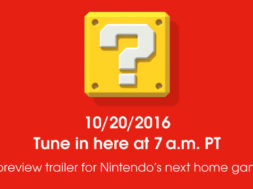 Nintendo has been hard at work on their next generation console called Nintendo NX. They released tidbits of information throughout the year but have gotten away without revealing anything concrete. Many have been speculating just what type of gaming system it’ll be. Would it be a contender to Sony’s Playstation or Microsoft’s Xbox? No one had the answer until now. Nintendo has just announced that tomorrow, 10/20/16 at 7AM PST, the public will finally get a glimpse of the mysterious Nintendo NX. The Japanese gaming company will be unveiling a preview trailer for their upcoming Nintendo NX gaming system. 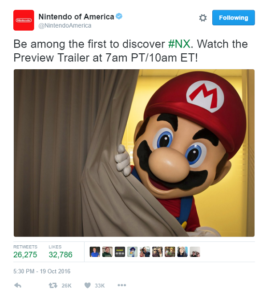 It has been years since Nintendo has been relevant with their gaming systems. Sony and Microsoft have been deploying quality consoles that made Nintendo appear trivial. But with this upcoming news tomorrow, we get to see where Nintendo’s NX will fit.

Just this month, Playstation released their VR headsets that allows Playstation owners to play and experience virtual reality. Xbox is working on Project Scorpio that’ll incorporate VR and possibly AR technology. With the competitors advancing the gaming industry and market, we’ll look forward to seeing if Nintendo is prepared to do the same.