Nintendo COO Reggie Fils-Aime Not Sold On VR Just Yet 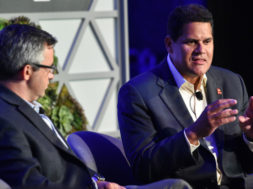 Nintendo COO Reggie Fils-Aime Not Sold On VR Just Yet

Nintendo has always been an innovator in the gaming industry. They were one of the first iconic brands to launch motion sensor controllers through their Wii gaming platform. They were also one of the first companies to launch 3D gaming with the N64. And while Nintendo is known for these wild ingenious ideas, they seem to be quite uncertain about the rising VR platform.

Recently, Reggie Fils-Aime, President and Chief Operating Officer of Nintendo of America stated that VR is not in the company’s immediate future. Although Nintendo has filed patents for an OEM HMD, they don’t want to take the necessary steps yet to proceed in developing games using VR technology. “Problem with VR is that there aren’t a lot of experiences that are truly fun,” said Reggie Fils-Aime at a recent tech summit.

But this doesn’t mean that they aren’t interested in moving forward in the near future. They’ve already found great success in the AR space with the launch of Pokemon GO through Niantic Labs. It actually became the fastest mobile app to reach the $1 billion mark in revenue growth. While it isn’t VR, it is a form of immersive gaming that consumers can relate to.

While it’s quite disheartening to hear that Nintendo isn’t ready to launch a VR gaming platform, it’s understandable. VR is currently in its infancy with lots of room for growth. We are seeing rapid advancement in the technology and will soon reach a level where we can get the same performance output from PC harnessed VR headsets to standalone VR headsets.

Additionally, the amount of capital going into developing this technology makes it quite promising to see what VR can do in the near future. Make sure to stay tuned for the latest news and updates.