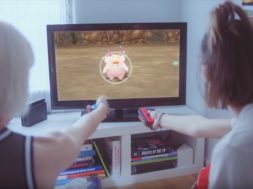 Players will be returning to the Kanto region to experience the classic Pokémon journey in a whole new way with the two versions. These two titles were created by GAME FREAK, the developers of the Pokémon core RPG titles.

Pokémon: Let’s Go, Pikachu! and Pokémon: Let’s Go, Eevee! are based on Pokémon Yellow: Special Pikachu Edition, which first launched in Japan in 1998. The upcoming releases have been remastered and reimagined to take advantage of the Nintendo Switch capabilities.

You will have the option of starting off with either Pikachu or Eevee depending on the game version. You will embark on an epic journey with your Pokemon and grow together as the game progresses.

How to catch the Pokemon

Since the Gameboy days, a lot has changed in gaming. With the release of the Switch console, you will now be able to capture Pokemon using your Joy-Con. Players will be able to throw a Poke Ball at your target with one hand, either by pressing a button or flicking your wrist. With fewer buttons and intuitive action, it’s makes the game a lot more immersive.

Users will be able to play the upcoming Pokemon game with a friend or family member. The game features a brand new mode where your partner can embark on the same adventure with you. Players will be able to throw Poke Balls together which boosts the chances of catching the creatures. They can also lend a hand during combat when facing off against trainers in the game.

Nintendo will be releasing a special controller for the game called Poke Ball Plus. This new accessory will replace the Joy-Con controller and allow you to wield a Poke Ball in your hands.

The peripheral device lights up with a variety of colors, vibrates, and plays sounds. When you try to catch a Pokémon, you’ll feel it moving inside its Poké Ball, and if your catch is successful, you’ll even hear the cry of the Pokémon you just caught.

Another noteworthy feature is you can take the Poke Ball Plus controller with you wherever you go. it is a mobile device and will reward you as you take it around with you in real life.

The new game and controller will also let you pair with the Pokemon Go app. Players who originally caught Pokemon in the Kanto region through the Pokemon Go app can be brought into the Nintendo Switch game. There will also be beneficial features between the two games down the road.