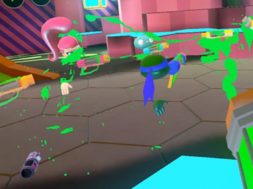 Nickelodeon, popular children’s cartoon network, announced this week that they have launched their new Entertainment Lab in Burbank, California. The lab is dedicated to creating immersive experiences with emerging technologies VR, AR and MR as well as virtual cinema, artificial intelligence (AI) and real-time rendering.

Currently, the lab is considered a research and development lab, due to the fact that VR for child use is still in a grey area with ethics, safety, guidelines, etc to consider. Entertainment Lab is first focusing on prototype creation, testing a range of ideas, and easing in to the use childhood VR experiences.

“We want to take it slow and determine what the long term effects might be,” said Chris Young, Senior Vice President at Nickelodeon “We’re on that evolutionary cycle where now it is time to reach out and share some of the things we’re doing and talk about it.” Young came over from the company’s Animation Lab.

The Nick Entertainment Lab has identified its goals as building prototypes to test new ideas, collaborating on innovation with creators, and shaping strategy around production capabilities to fuel future content opportunities.

“Our Entertainment Lab is a way to give our artists and creators access to innovative tools to inspire new ways to tell stories for the next generation of kids,” said Cyma Zarghami, President of Nickelodeon Group. “We are working with technology partners, gaming and visual effects companies and our own creators to bring our IP to new platforms, in new formats, and faster.”

Nickelodeon has not revealed too much about their current prototypes or projects, but they have demoed a VR Slime Zone experience, in which up to six players use avatars of Nick characters to engage in virtual space activities like blasting slime at each other. You can visit Nickelodeon’s Facebook page to see a video of the Slime Zone experience here!