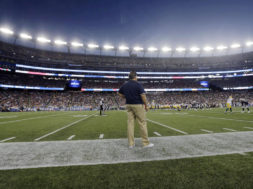 Behold! The NFL just announced a partnership with Google to launch a 360 video series on YouTube and Daydream’s VR platform covering perspectives from NFL players, coaches, executives, cheerleaders and fans. This new series will try and cover depth in storytelling through the use of 360 VR technology. You’ll get up close and personal with a “Day in the life of…” perspective with the ability to see freely in any direction. The series will be produced by NFL Films and include 9 videos in the series. The first episode is set to premiere on Thanksgiving day through Google’s two platforms.

The first episode in the series will follow the Philadelphia Eagles through their journey in trying to win a Superbowl. You’ll be seeing the popular franchise from the sidelines on game day and have a chance to witness the team in 360. And what makes this all so exciting is the level of freedom in exploring your surroundings within the set location. You’ll be able to turn and see NFL players standing next to you. You’ll be able to witness the play calls. You’ll be able to see the roaring crowd standing right behind you. And this is all achieved through one fixed camera.

NFL also looks to provide different scenarios and storylines to this episodic series. Following the Philadelphia Eagles coverage, they’ll be trying to convey a story about Green Bay Packers’ culture and upbringing in history.

This joint venture on tackling the 360 video front will raise awareness to the power and gravity of 360 VR technology. However, while NFL has announced that the series will debut on Thanksgiving Day for YouTube, the video won’t be available on Google’s New Daydream VR platform until the end of this year.

There hasn’t been any word if the series will be available for other platforms later down the road. With many popular devices such as Samsung Gear VR, Oculus Rift, HTC Vive and Playstation VR, it’s hard to say if the NFL will simply overlook these platforms.

NFL Films have produced many successful hits such as “All or Nothing” and “A Football Life.” this newly announced series looks to be the first on the 360 VR medium.