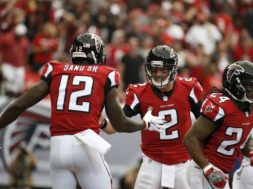 Atlanta is a giant metropolis with die hard Falcons fans. The team hasn’t reached the Super Bowl since 1999 (their first appearance). But 2017 has become a destined year for the organization to make another appearance on the biggest stage.

In the 360 video, you’ll follow the Falcons and their amazing kicker Matt Bryant throughout their journey this season. The primary focus of the video will be surrounded  on the Falcons vs. Panthers match in North Carolina. You’ll get to follow the team into the locker room and see the team celebrate their victory. You’ll also get a glance into their practice facilities and what it takes to be a winning team in the league.

The 360 video experience will also expose you to the Georgia Dome, home of the Falcons. 2017 will be the last year that the dome will be in use. Starting next season, they’ll be playing at a new state of the art facility called the Mercedes-Benz Stadium. The new dome came with a large price tag of $1.5 billion. If you’re a fan of the Falcons or NFL in general, this is a 360 video you must check out. The video is available in VR with the use of Google Cardboard or Daydream View VR headsets. Make sure you have the correct smartphones to operate the mobile headsets.

Here is the link to the video