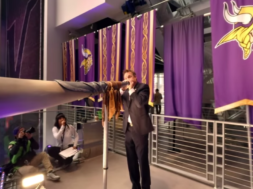 NFL has been on a journey to release 360 VR videos of the league and the life that revolves around the sport of football. Today, they released a 360 video of the Minnesota Vikings vs. the Arizona Cardinals at their newly built U.S. Bank Stadium that features state of the art technology. The Vikings is a team full of tradition and the video shows just how much the fans love the team.

In the video you’ll find the team walking out of their tunnel to warm-up for the game. The video places you right in the middle of the warm-ups and display an immersive experience as a viewer. Then it moves on to their GM, Rick Spielman, who describes the team and the newly built stadium.

The video will also take you upstairs where you’ll catch Pete Bercich, a former linebacker, blowing through the giant Vikings Gjallarhorn. The video then shows off its recent tradition of the SKOL Vikings chant where fans clap at a synchronized tempo to give a roaring cry. When you spin the video around you can see a wave of hands synchronized together which looks amazing.

Finally, you’ll be placed on the sideline with the whole Vikings team watching the game from the field. It’s quite an amazing experience and a video worth watching. This can be watched in VR with the Google Cardboard and the Daydream View VR headset.