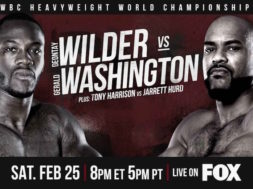 NextVR has been accomplishing many of their goals and agenda by constantly streaming major sporting events in VR. The VR company has recently wrapped a successful coverage during the NBA All-Star weekend where they broadcasted content during skill-challenges and matches. NextVR looks to stream another big event tonight in VR with the live broadcast of the WBC Heavy Weight Championship where Deontay Wilder will be facing off against Gerald Washington for the coveted belt. The two heavy-weights are at the top of their league and both boxers are undefeated.

The broadcast is in partnership with FOX who will be hosting tonight’s event. NextVR will be providing the best seats in the house with a live VR broadcast. You’ll be able to look in any direction and see things unfold in real-time. You’ll be given the freedom to look at the match in which angle best suits you.

The fight will start at 5PM PST, 8 PM EST. You can watch tonight’s WBC Heavy Weight Championship fight on NextVR’s mobile app found in the Oculus store and Google Play. Simply run the application through your smartphones and compatible mobile VR headsets including the Samsung Gear VR and Google Daydream.