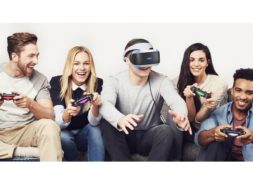 Last week was PlayStation VR’s one year anniversary. They announced a bunch of new upcoming games in addition to some amazing discounts on incredible titles.

Gran Turismo has always been a stable game for PlayStation users. It offers realistic driving experiences where you get to drive some of these rare supercars in an environment that’s usually only suited for professional drivers.

According to the developers, Megaton Rainfall fills the market gap of “games that let you control an indestructible superbeing who can fly at supersonic speeds across the Earth facing a global alien invasion and preventing the destruction of one city after another.”

At the beginning of the game you can only roam the Earth, from the bottom of the ocean to the stratosphere, looking for threats. Later, this freedom of movement will increase, letting you fly to the Moon or walk across the surface of the Sun which is quite different from other VR games in the FPS genre.

This sense of freedom will be one of the highlights in Megaton Rainfalls, as well as the sense of scale of the landscapes, which is said to “really shine in VR mode.”

The giant motherships that appear in the game may not be as dangerous as the smaller enemy vessels according to the creators. With smaller vessels you’ll have a harder time aiming and creating collateral damage in the process of eliminating the threat. The game has reviewed great ratings so far and we too, recommend the game as it provides a unique VR gaming experience that’s quite rare today’s market. Sort of envision the game as The Sims meets War of the Worlds (Tom Cruise movie).

No Heroes Allowed! VR is a real time strategy game that allows you to become the God of Destruction where you aim for world domination with Badmen and Badmella.

Players will have the ability to breed monsters and invade human territories using these creatures. You’ll have a diorama-like perspective through the view of the God’s eyes. You’ll begin your quest by jumping straight into the game and breeding those monsters.

No Heroes Allowed! VR is now available on the PlayStation Store. It has received some great ratings so far. If you want to try an interesting and quirky game, No Heroes Allowed! VR will be a great choice. On a side note, the characters in the game look quite similar to the Joker and Harley Quinn.