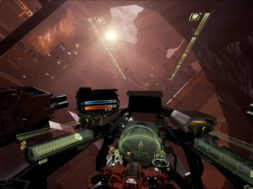 EVE: Valkyrie was one of the first VR games to be released alongside the Oculus Rift during its initial launch phases. Leveraging the charm of outer-space combat, the game entrenches you in an immersive environment where you get to fight off enemies in a specially designed spaceship.

While the game already offers beautiful content and scenery, GeForce wanted to push the limits and release an update that further enhances graphics and performance through something they call “Ultra Graphics Mode.”

These new settings greatly enhances graphical fidelity and immersion in EVE: Valkyrie according to GeForce. They’ll be using newly-added technologies and techniques that optimizes and improves performance, specifically designed for the game. Here are some specifics to the new settings:

In addition to the listed specifics, Ultra mode enhances cockpit lighting, improves the fidelity of shiny, specular surfaces, increases the quality of lighting and shadowing in every area and level, improves the fidelity of reflections and shaders, and adds dynamic lights to projectiles. In total, these improvements will deliver a more realistic visual experience, closer to what you’d expect in reality. The ultimate goal behind the update is to increase your immersion in the virtual world.

Users who have enabled Ultra Graphics Mode without meeting the minimum settings will be auto-reset to High. EVE: Valkyrie is currently available on the Oculus Rift, PlayStation VR, and HTC Vive.