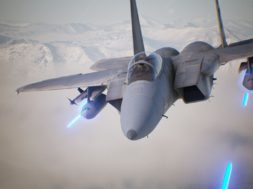 Ace Combat has been one of those special franchises where you take to the skies inside the cockpit of a fighter jet. Bandai Namco has delivered many iterations of the flight simulator over the years and now has reached its 7th installment called Ace Combat 7 Skies Unknown. This upcoming title features a special VR element where you get to pilot one of these amazing fighter jets in an immersive environment.

During PlayStation’s showcasing that took place prior to Paris Game Week, they launched a special trailer which shows raw game footage from the game. Through the trailer you can see that Ace Combat 7 Skies Unknown will incorporate striking visuals with that heart-pounding action from the comfort of a multi-million dollar fighter jet.

There will be various weather patterns featured in the game that will test your abilities as a pilot. You will engage in air-to-air combat and be involved in many dog fights in the sky. Some of the cool elements about the past Ace Combat games is its ability to deliver a realistic type of simulation which allows you to feel what real pilots might go through in similar situations.

While there isn’t a specific release date available yet for Ace Combat 7 Skies Unknown is set to release some time next year in 2018 on PlayStation VR. There isn’t a set price yet for the game but we believe it’ll retail at around $59.99.