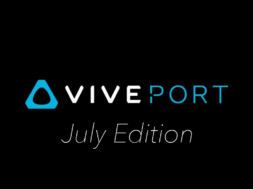 Team HTC has been revamping their Viveport library over the past couple of months. They were the first company to launch a subscription based-model for downloading VR content on the HTC Vive. Below are some of the newest content you’ll find in the Viveport library for the month of July.

LyraVR is a music creation platform that takes full advantage of room-scale VR, LyraVR isn’t about recreating guitars or trumpets. Instead it lets you create music by placing sounds in a virtual environment, then linking them together to form loops or lining them up to create songs. If you want to get hands-on you can play virtual drums, keyboards and more, then either perform in real-time for friends or share them for others. It’s a fresh way to look at, experience and create music, unique to VR.

Dwingle B.O.T. is a VR experience where you’ll be able to build your own AI companion robot that works alongside you. The Bot’s mood will change and adapt depending on your interaction with the android. Make sure to strap in for a unique experience.

Panzer Panic is a local multiplayer VR tank game where players will need to capture the enemy’s flag while defending your own. The game boasts plent of power-ups, fun tank customization options and fast gameplay.

Out-manned and outgunned, you are the last line of defense against a high-tech, paramilitary force occupying your city. Armed with the Manticore, the military’s top secret combat bow, and an arsenal of over powered arrows, you will need to fight your way through an enemy armed with high-tech weaponry, armored mechs, attack drones, and a host of biological secrets yet to be uncovered in the remnants of a city on the brink of ruin.

#Archery is a quirky VR game where players will interact the whole day shooting arrows at anything possible while enjoying a fun filled day. You won’t be standing on a target range for this: you’ll be selling ice cream, making vegetarian pizza, delivering newspapers, chopping wood, catching fish and, as they say, much more. You’ll never look at a bow and arrow the same way again.

#SelfieTennis is another interesting VR title that makes its way to Viveport this month. You’ll have the ability to enjoy a crazy VR tennis like match with some interesting twists and turns. Let’s just say that it isn’t a regular tennis match..

HoloBallputs you right in the middle of those beautiful pixels with only a paddle, tasking you with defeating a rogue AI. Your skills will be tested as you hit, smash and curve your virtual ball on the path to freedom.