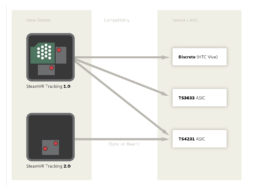 Valve is currently ramping up their next generation hardware for their VR platform which includes new SteamVR tracking base stations named TS4231. In a new announcement by Joe Ludwig, Steam will be ramping up production of base stations for OEMs.

The new base station uses 5 components per sensor that makes it cheaper to place at each sensor. Additionally, it will provide a burst of data per laser or sync hit. Using this data will allow information to be transmitted on the laser itself, which can be uses to learn more about the source of that laser.

According to the SteamVR team, this new capability to encode information in the laser is important for two reasons. First, it allows support for more than two base stations, thus larger tracking volumes. Second, it allows a base station to function without including a sync blinker, which is the source of most of the interference between base stations (and is also a significant driver of base station cost.) We call this technology sync-on-beam. This is what Valve is calling SteamVR Tracking 2.0.

Below are some improvements coming on the SteamVR Tracking 2.0 Base Stations:

Ludwig mentioned that you probably won’t see any benefit out of these new base stations unles you are working on a HMD that is based on the TS4231 sensors. These units will not work with existing HTC Vive headsets.

In early 2018, Valve will be expanding the functionality of the new base stations where you can have up to 4 sensors set up that covers a single room play space of roughly 10 x 10 meters which equates to around 30 x 30 feet. Ludwig stated that they are “evaluating adding functionality beyond 4 base stations as part of our product roadmap but do not have a current timeline we can share.”

Engineering samples of SteamVR Tracking 2.0 compatible base stations are available now upon request. Developers can make requests via email. The early engineering samples (EV2 and EV3) have a blinker for backwards compatibility and can be tested with the Vive and any other tracked objects. The new base stations will start shipping in early 2018 but they expect demand to initially outstrip supply so quantities may initially be limited.