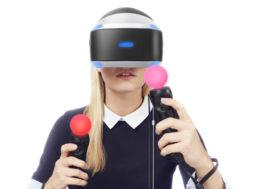 There were some cool releases recently on the PSVR. This includes the highly rated Everest VR game from Solfar. While there are many upcoming titles, there are still many PSVR games to enjoy.

From Flight School Studio comes an ominous and eerie VR game called Manifest 99 where you’ll be finding redemption in the afterlife.

The story takes place aboard a mysterious Harry Potter like train that rumbles through an unknown void. Here, you’ll be assisting four distinct travelers named Bear, Doe, Owl, and Crow as they make their journey to their final destination. Using character engagement as a method of movement, Manifest 99 allows you to explore scale and navigation. Make sure to give this a look on the PlayStation store.

Developed by Void Dimensions, Light Tracer will take you on a light-hearted adventure where you play as a godlike character that must guide a princess to the top.

The Voltron VR Chronicles will place you in the “Voltron: Legendary Defender” universe where Lance discovers the remains of a lost alien race deep within enemy space. He ends up releasing an unstoppable force that threatens the Paladins and Voltron. You’ll be piloting the Blue Lion as you embark in epic space battles. The game will also involve you solving interactive puzzles and challenges along the way while aboard the castle ship. If you’re a fan of the series we highly recommend you check out the new VR game.

The Farm 51 has just released Chernobyl VR Project on PSVR which takes you behind the scenes of the nuclear fallout in a small city located in Ukraine. Chernobyl accident was the result of a nuclear power plant that had some mishaps which led to the leak of large amounts of radiation. Today, the city is a ghost town that’s fueled by scary ghost stories.

The VR experience itself will take you on a virtual tour to the ghost town of Pripyat and Chernobyl Power Plant that gives the opportunity to visit the radiated area and get to know its history in VR.

In this amazing VR experience, you’ll be able to journey up Mt. Everest with a visually striking view. The studio stitched over 300,000 real photos to bring an unparalleled visual of the tallest mountain. If you ever wondered what it’d be like to be on Mount Everest, this will be a perfect opportunity through the virtual PSVR headset.