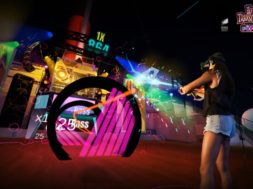 With all the news coming out of OC5, there’s definitely a lot to look forward to when it comes to Oculus. We’re excited to see the sequel to Lone Echo and the many other games announced. But this week there were a lot of great VR games released as well. Let take a quick look.

Use your kung-fu expertise to thwart off waves of hungry dinosaurs! Your weapon, the quarterstaff, might be a simple weapon but it can become mighty useful if you can wield it right. Here are some protips about that.

Dance Collider is the ultimate dance and rhythm game for VR. Dance-off against eight unique characters each with their own music and dance style. Perfect your technique and strike at incoming nodes to get your body moving. Set in 24th century, dance battles take place in a series of vivid futuristic arenas complete with vibrant light-shows to give players a truly epic sensory experience. With 24 dance battles to master, the action never stops.

In Taphouse VR, you are the bartender! Run your own taphouse, give drunk dwarves their fill of delicious ale or drench the bunch by mixing delicious cocktails! Everything around the counter is yours to mess with – including your paying customers.

The Steadfast VR Challenge is a hybrid of First Person Shooter and Tower Defense that forces you to incorporate strategy with marksmanship in a virtual world! It’s delivered in an infinite wave based format where you’ll find yourself frequently combining fast, deliberate decisions with quick reflexes.

You are Adonis Creed, fighting toe-to-toe with the world’s top opponents to establish your boxing legacy. This intense cinematic experience features new Phantom Melee Technology for impactful VR melee combat so you can train, fight, and win like Creed.

Hotel Transylvania Popstic is a super fun VR rhythm game that combines high energy music with full body movement. The goal is to match fast-moving patterns of colorful orbs flying toward you with the corresponding colors on each end of your Wands or Popstic.

Chop It is a VR rhythm game about chopping and punching your way to glorious funkadelic victory. Be karate. Gaze in awe as the Sensei launches himself around the Pagoda raining building materials on your head.