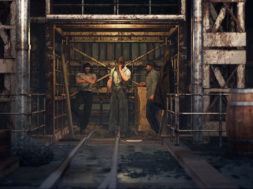 September is coming to an end but there are a lot of great new VR games to check out before the end of the month. Let’s take a quick look.

Chrysalis is a whimsical undersea adventure game in which players assume the role of an explorer who gets trapped within the innards of a cocoon-like monster while traveling at sea. In the belly of the beast lies a surreal ecosystem filled with mysteries to be discovered and countless wonders and creatures to interact with to uncover clues for escape.

Mad Factory is now open for business! A fast-paced, and highly replayable VR experience, Mad Factory is five minutes of frantic fun for everyone. Its visually rich world, intuitive interactions and innovative gameplay will delight a wide range of VR players, from 8 on up. It’s perfect for birthday parties, date nights, and playing with friends and family. Even people who think they don’t like VR, ask to play Mad Factory again!

So, immerse yourself in a retro-future world, where you’re the new hire on the floor of the universe’s finest cookie factory. There you can discover flying robots, mechanical chickens, and waterfalls of cascading milk. And in a race against time, you can bake, frost and deliver delicious cookies to earn top scores.

Users can experience how dangerous and grueling life of a miner was 100 years ago – feeling what it was like racing down hundreds of meters into the earth in a shaky elevator and mining coal with a virtual pickaxe. Something you will never be able to do in real life again.

A completely unprepared town made entirely of paper is hit by its first ever fire, and it’s up to you to save it Rookie. A comedic, tongue in cheek action-adventure VR exploration game.

A virtual reality survival game. See if you could survive stranded on an island with only objects you can scavenge from your crashed plane or craft from resources available in the nature.

Be your own boss! Maximize your profit to pay the rent for the next day! Buy unlockable equipment that help with building your shop.

Imagine an escape room set in a deranged mind. Experience a first-person exploration game in a chilling new dimension. Shift between three perspectives of a family and unravel the mystery hiding in this mind-bending psychological thriller.

Navigate an unfamiliar world in virtual reality using echolocation, where sounds become images. Trapped in a mansion by the devious Warden, make your way through its many rooms, riddled with puzzles and dangers, moving ever closer to the truth—and your only chance to escape.

Tired of work? Feeling trapped at your position with no hope of promotion? Vent out your frustrations with Salary Man Escape, a satirical and edgy physics puzzle game about helping a disgruntled Salaryman escape his miserable life.

You’ve got a VR headset and some cool motion controllers, but what can you really do with them? Throw some virtual axes! In Axe Throw VR, a virtual axe throwing range becomes your playground!

For the first time, bus, tram and train are simulated extremely realistic in a single game – and you can drive them, build them or create the world around. LOTUS – simulation will never be the same!