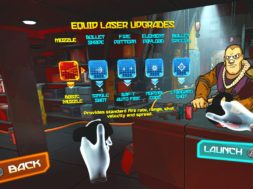 We are getting closer to Halloween and seeing more releases of some spooky and scary VR games. But there are also some unique VR games that have caught our attention. Let’s jump on in.

Traverse the world without teleporting including sprinting, climbing a ladder or sliding down a rope. Our motion sickness free technology will allow you to fully immerse yourself in the game world, without the risk of your enemy teleporting out of nowhere and attacking you from behind.

Experience the next generation of VR combat with Evasion, an intense sci-fi bullet-hell shooter. Fight solo or team up as you face legions of enemies in an action-packed Story Campaign or the challenging Survival Mode.

Based on the sci-fi short story by Philip K. Dick, The Great C is a cinematic narrative set in the aftermath of an apocalyptic event. Featuring a thrilling storyline, stunning environments and a powerful soundtrack, the viewer is transported to a desolate landscape in which the remnants of humanity are ruled by an all-powerful supercomputer known as the Great C. Each year, the nearby village is forced to send a young person on a pilgrimage to appease the mysterious machine, a journey from which no one ever returns.

80’s spaceship anime and arcade-gaming meld with ultra-modern physics and A.I. in a skill-demanding, procedurally generated rogue-lite adventure! Be the hero in a world that oozes classic Saturday morning anime but plays like a tough, modern, tactical shooter. Try to survive the hostile environments of deep space, battling warring factions full of unique and cunning enemies. Unlock ever more powerful upgrades as you learn the secret of the GALAK-Z, and die and die again as you valiantly struggle to become the ultimate pilot – finally good enough to beat what GALAK-Z throws at you!

The game brings you to a quest for the magic stone that grants power over Dragons. Dozens of fights with hordes of enemies will be thrown at you your loyal allies along the way. The game world consists of various different locations with special firing spots. Move swiftly along these spots, choose the right view and angle for attack, protect your companions and defeat the enemy.

Castaway VR is an open-world sandbox survival game. You can mine, gather, cut, hunt, swim, craft, build, ride horseback, tame wolves, and do so much more. Castaway VR – Survive long enough to escape!

Step into the memories of a prisoner of war and let his story unfold.

RED: Lucid Nightmare is a survival horror game. Play as Mercedes, as she tries to piece together a missing persons case and strange, recurring nightmares.