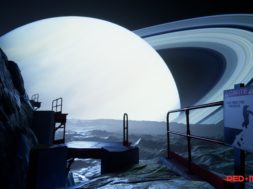 It’s always exciting to learn that there are new VR games to look forward to every weekend. And this weekend is no exception. Today, we’re here to present to you a new slate of VR games for the Oculus Rift.

How can it get more exhilarating than going off a gigantic jump on your skis. In this game you will be racing through the sky to achieve the longs jump records. And since this is VR, we can basically do it anywhere in the universe and that includes the moon.

Red Matter is a story-driven VR puzzle adventure game set during a dystopian Sci-Fi Cold War. Take on the role of Agent Epsilon, an astronaut of the Atlantic Union dispatched to an abandoned Volgravian base on Rhea, one of Saturn’s moons. Your mission: to investigate a shady top secret research project.

Solve puzzles in a beautiful, high-detail brutalist environment which only becomes more and more surreal as the story progresses. Use an array of hi-tech tools to decipher hidden messages and mechanisms and uncover ever deeper and darker secrets of the facility. But beware of what you may find… Once you discover the truth, will you be able to stomach it?

Awoken by a nightmare, you find yourself alone in your tent. A couple has set up camp uncomfortably close to your campsite. They are looking for something ancient. Undeterred by rumors of cult worship, and the various missing-persons reports over the years, they set off into territory clearly marked ‘no trespassing’. Compelled by an urge to follow, you set off to explore this isolated forest yourself.

DBM is a magical VR experience with an emergent narrative seen through the eyes of the townships newest Brewmaster. You control the story through your choices. Brew potions and poisons for a variety of characters. Every brew has consequences that will reach far beyond the walls of the old tavern.

In the aftermath of being captured by the evil corporation he was trying to take down, Rick Slade died as an unwilling participant of an experiment to transfer consciousness to another host… or did he? Take down the corporation that did this to him. Welcome to Wanted Killer VR!

Acro FS is a recreational, stick-and-rudder flight simulator for high performance aerobatic aircraft. Fly an Unlimited-class aircraft at a desert practice site, or test your racing skills against the clock.

Fruit for the Village is a narrative VR incremental game set in a world torn apart by climate change and war. Out in the newly formed deserts, small villages struggle to survive in the new climate, working towards creating a new way of life.