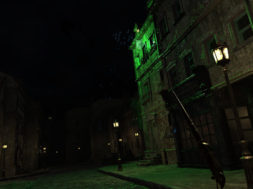 After all the announcements from E3, everyone who owns an Oculus Rift should be excited about the upcoming games. But while we await those upcoming titles, here are some new VR games that’ll fill your appetite.

Cat Sorter VR is a game where you get to sort defective cats from the perfect ones. You will be putting them in an assortment of tests to make sure they meet the needs of the company. Be prepared to pet and throw lots of felines.

Budget Cuts is a VR stealth game where you dexterously zip, sneak or rambo your way forward through thrilling, oil-splatter filled combat.

Be like Kamil Grosicki! Put on your VR headset and become a pro soccer player, scoring goals and blocking the shots.

Be an adventurous traveler, who explores the mysterious places and solves interesting tasks. Each location opens a door to countless adventures. Go and see what lies ahead of you.

Catan VR allows tabletop fans and new players alike to experience the best-selling board game in a fresh, fully-immersive format. Take on other players around the world or play against Catan personalities and watch the island come to life in VR for the first time.

Wizard Street is a game where you can cast your magic to abolish the dark souls who are out after you. Make sure to cast those Harry Potter spells!

You own a fish shop in a small peaceful seaside town. However, your shop become favored by the flies nearby. In order to protect your fresh fishes and other seafood from flies, you decide to fight with them. Pick up your weapons, become a fly killer, and defeat them.