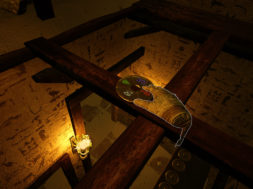 It’s always a treat to hear about the new VR games that have released on the Oculus Rift. This week, we saw a lot of great titles come to the platform and we’re excited to share those with you.

V-VR is a narrative-driven comedy-adventure game about VR and AI. In a future where AI has transformed society, can humans still find purpose? Find out with Activitude, a service that lets humans aid AI clients in increasingly curious ways. Follow the instructions of Activitude’s AI overlord, Chaz, and find your calling in this tech-fueled future – or try to break free and reclaim your humanity before it’s too late.

Oval takes your skills to a whole new level with thrilling and competitive multiplayer battles. Break your speed limit and go faster than ever without motion-sickness thanks to Oval’s unique technology. Create, share or play awesome community maps using the multiplayer level editor.

Catch & Release places you on a beautiful mountain lake and lets you freely explore and row around while you choose your fishing spot and take in the scenery.

Moss is a single-player action-adventure puzzle game and new IP from Polyarc tailor-made for the VR platform. It takes classic components of a great game—such as compelling characters, gripping combat, and captivating world exploration—and combines them with the exciting opportunities of virtual reality.

Are you ready to party in VR?! AHHHHHHHHH~

A jogging pig meets a delicious cake. Will he give in to temptation? Not while you’re watching! Google Spotlight Stories presents Piggy VR, a new level of interaction between character and audience.

mmerse yourself in a dark world, full of mysteries and unforeseen events. Escape punishment and restore justice in this atmospheric VR game.

Challenge your wits, test your mettle, prove you are worthy of a second chance by completing the riddles and puzzles of the Egyptian Gods! Escape from the ancient Egyptian tomb or seal your fate forever