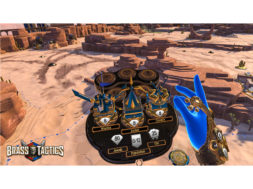 We always like to provide you with some new and exciting VR games to play every week and this post will be no different. We’ve played and identified some new VR games on the Oculus Rift that might be worth the money. Check it out.

Below is the full list of new recommended games to play on Oculus Rift this week:

Do you like pigs and bacon, because if you do Bacon Roll might be the perfect game for you. In this VR game, you’ll help Dot the pig roll away from the evil wolf chef, thus ruining his dinner plans. With the help of his father and his brother, you will guide Dot to his beloved Princess Rune.

Brass Tactics is a living tabletop battlefield where you get to command dozens of units and take over the enemy’s territory in a game that redefines how an RTS can perform through VR. Users will be able to move the table to adjust your perspective and dive into the action, directing your army with both hands, all while seeing and hearing your opponent’s avatar across the table.

– Customize your army with dozens of units and upgrades, each with exploitable strengths and weaknesses.

– Embark on a 6+ hour story campaign.

– Discover something new every game with 20+ uniquely crafted, hand-detailed maps.

– Test your strategies against three unique AI personalities, each with four difficulties.

– Let the world fade away with intuitive, comfortable controls.

There is a new sheriff in town! High Noon is a fun VR shooter where you play as а sheriff in a small town somewhere in the Wild West. You’ll notice both the silly and action-packed side to the game.

Is there such a thing as too much fun? Well, there might be in Summer Funland where you get to go on some epic rides and adventures in virtual reality. You’ll find that gravity and imagination won’t be stopping us from having an epic time in the virtual park. Make sure to give this one a try.

Conquer is an action-packed combat game experience crafted exclusively for VR/MR . The story is set in age of ancient times where the players will explore the game’s dilapidated world, Kingdom of Yan , which is occupied by evil beasts, carrying the sacred gift of the gods to complete a quest against evil.

Konrad, the cute kitten, needs a helping hand and lots of love. You have to satisfy his needs and desires: Give him his cat food in the kitchen, put him in his litter box, let him take a ride in a hot-air-balloon and lots more!