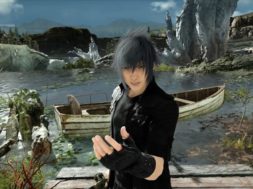 Square-Enix has been planning on releasing multiple spinoffs of their recent franchise game, Final Fantasy XV. One of those titles is called Monster of the Deep: Final Fantasy XV which takes you on an epic fishing adventure in VR.

Releasing on November 21st for PlayStation VR, Monster of the Deep will feature Noctis where you travel to various lakes in Eos. Noctis ends up inviting you along in the journey has his friends aren’t particularly interested in catching the fish themselves.

When you’re trying to catch the fish you’ll notice that you do have to wait a little bit of time before actually getting a bite. This simulates some realism to the game. When you get a bite, you’ll notice the controllers rumbling, which at that point you must reel it in.

Monster of the Deep will also feature some water monsters which you must strike down using a bow and arrow. But that’s about the most hardcore action you’ll see in this spinoff game.

After catching all the fishes for the day, you’ll join Noctis and his gang around a campfire where you’ll be eating the prize. Think of it as virtual sushi.

You can pre-order the game today for $29.99 on the PlayStation store. We believe that there is a typo on the website itself which says December 31st. Make sure to give this PSVR game a go if you’re a fan of VR, Final Fantasy or fishing.