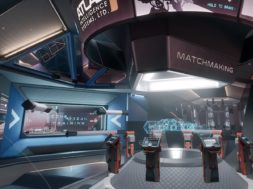 Ready At Dawn currently holds the Game Of The Year award for their awesome job with Lone Echo in 2017. Alongside the magnificent AAA VR game is Echo Arena which is their competitive e-sports VR game. It pits you against other players where you must glide, spin, and maneuver around in zero-G to score on your opponents.

The game itself is quite entertaining where it provides a dash of fun and excitement. And to further increase the quality of the game, Ready At Dawn has decided to revamp the lobby in Echo Arena.

In the trailer you can see the new infrastructures they’ve built inside the lobby where you can train, warm-up, and practice for the big game.

The personal training disc is available in the practice arena of the lobby and is also available before the game starts in private matches. Use the button on the Arm Computer to recall it to your hand to throw it again. Other players can not see or interact with your personal disc.

Looking to practice your shots alone before jumping into a match? Use the matchmaking terminals and enter a private match without anyone there to take the disc from you so you can practice your skills!

Ready At Dawn has has changed the party terminal that allows more party members to assist in making changes to the match (versus only the Party Leader having those controls).

A bug was discovered that in certain cases (and, more common, in high speeds) the offset of the hand to the disc’s center of mass was found to be slightly different. This could mean the disc would throw faster and affect the consistency of the players throw angles. Now the offset is fixed and throws should be slightly more consistent.