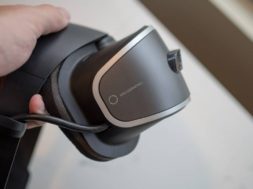 During the end of last year Microsoft has promised the release of VR headsets along with their partners. And today, pictures have surfaced of the new OEM product by Lenovo. This new headset features many of the latest technologies such as room-scale VR. It’ll also display the virtual world in 1,440 x 1,440 OLED screen.

In the picture, you can see that it has 2 cameras mounted on the frontside of the headset. This will ultimately allow users to merge the real and virtual world together to create something called the mixed reality. There isn’t any word on when this product will be available other than Lenovo saying later this year.

With such high competition in the market, who will be sitting at the top towards the end of the year?