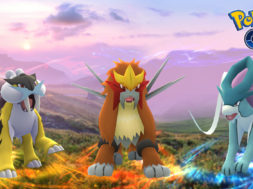 We’ve recently seen the release of Articuno, Zapdos, Moltres, and Lugia on Pokemon GO. Trainers worldwide teamed up with their friends to go on raids and catch these legendary Pokemon. While the event and play-style is quite new to the app, many trainers were able to collect the Gen 1 legendaries in a short amount of time.

To keep the momentum going, Niantic has announced the release of Gen II legendary Pokemon. Trainers worldwide will now be able to join Raid battles for a chance to catch Raikou, Entei, and Suicune out in the wild. But these Pokemon will be limited to certain regions around the world.

The event will be held from August 31 to September 30th, which gives trainers a gap of about 1 month. On September 30th, all three of these Legendary Pokémon will move to a different location and will be available for Trainers to battle with friends until October 31. They will make their final stop in the last remaining location on October 31.

Niantic has also stated that they’ll begin the EX Raid Battle field testing at select Gyms around the world before it’s fully rolled out. This helps ensure that Niantic will be able to role out a feature after thorough testing over a period of time. “During the field test, we’ll be making periodic adjustments to EX Raid eligibility requirements, frequency, times, locations, and durations with the goal of making the EX Raid Battle feature engaging, rewarding, and most importantly, fun for Trainers who regularly participate in Raid Battles,” said the Niantic team.

“The first EX Raid Passes will be sent out soon, and those invited will have an opportunity to try out the new system as early as September 6. Stay tuned for more updates as we launch the EX Raid Battle field test to more Gyms in the weeks ahead.”