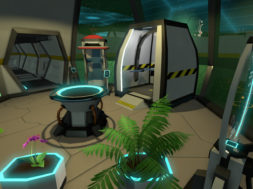 Do you have your costume picked out for Halloween, because I do! And I am ready to show it off. But before that epic time, there’s some amazing new VR games we need to check out on the HTC Vive.

It’s been six years since the Undead War shattered the world. Nightmares stalk the land, and sickness and death pervade the world. At the center of this nightmare, the Witching Tower’s Queen directs the chaos, feeding, and growing stronger.

You have been chosen to survive by forces you don’t understand. You are Anna, a fugitive. For years, you have been hunted by the Tower’s forces, lead by the Queen of the Undead. Now, dragged to her in chains, you seem destined for a worse death than most. The Queen believes you possess a secret that can reshape the world, for good or for ill – and she’s determined to extract it from you.

BATTLE X Arcade is an arcade version of BATTLE X, which is specifically developed for LBE(Location Based Entertainment) venues. But now, you have a chance to access the raw FPS game in your own home.

Be free and go sailing on your own yacht surrounded by relaxing ocean! You can steer, control the sails and teleport around the boat. Meet others sailors in an optional multiplayer mode.

Star shelter is one of the first survival games made for VR. As you’re stranded in space, you must climb around in Zero-G, explore, scavenge, craft, hack and fight to survive. You have to build, arm and upgrade your own space station in order to escape the cosmic graveyard.

Gamindustri – a world sitting at the convergence of multiple dimensions. Of these existed the Zero Dimension, a world on the brink of collapse. Zero Dimension’s last guardian, Uzume Tennouboshi, waged a war against a mysterious evil known as the Dark CPU. Her desperate cries for help crossed dimensions and reached Neptune, the CPU of Planeptune, who would leave her world to join the fight.