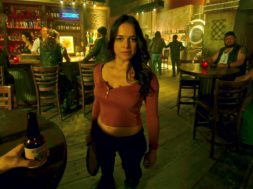 Hope everyone had a great Thanksgiving and a great shopping spree on Black Friday. If you are new to the VR community, we welcome you with open arms. Here is a new list of VR games that are now available on the HTC Vive.

Tabletop Basketball VR brings a basketball experience that you’re use to from the TV down on to a virtual table. It’s like having little toy basketball players come to life. This is a semi-simulation style basketball game. We designed our own smart AI technology around your game play.

While visiting a well renowned doctor, you notice something is amiss at his office. Before you realize what’s going on, he drugs you and you fall asleep. When you wake up, you are sitting on a chair in the back room, locked and unable to get out of the building. You can tell that the doctor is running some kind of experiment on animals and people and you are his next subject! Can you figure out what’s going on and escape before it’s too late?

Enter a new world of storytelling in this blockbuster “immersive cinema” experience from visionary filmmaker Robert Rodriguez (Sin City). As a rogue agent with a mysterious past, you enlist the help of enhanced super-assassin M-13 (Michelle Rodriguez) to retrieve your identity and strike against the deadly organization that created you. Also featuring Norman Reedus (The Walking Dead), THE LIMIT will put you inside a high-octane 20-minute action movie like you’ve never seen!

THE LIMIT is a lean-back experience captured in a new cinematic VR format, wider than 180 degrees, that bridges the gap between large-format movies and 360-degree video. It offers ultra-high fidelity and unprecedented production value from a live-action VR film.

Help a stranded girl escape with just your eyes in this puzzle game designed specifically for VR. From the stationary convergence point between the two worlds, use the “Focus Lock” to tell her the steps she has to take in order to put the star back together.

Scraper: First Strike is a VR shooter game with RPG and exploration elements. Created and Imagined by Jim Ivon, Scraper: First Strike® uses UE4 to deliver gamers into the year 2076, where they must battle renegade robots in high-rise skyscraper complexes.

Rento Fortune is online VR multiplayer business board game. Between 2 and 6 players can play together. Trade lands, build houses, win auctions, roll wheel of fortune, risk in Russian Roulette and have fun.

PolyCube is a block-stacking puzzle game in full 3D, with optional VR support. Move and spin your block pieces in all directions to place them in the puzzle before time is up and the piece drops.

Short Circuit VR is an electronics lab simulator in Virtual Reality. You can build your own electronic circuits with the components provided, learn basic electronics by completing challenges and just have fun while experimenting and making awesome projects!

Professor Chuckenhope is a first person virtual reality knife throwing game, set in a victorian style theatre. Progress through the acts by hitting targets without hitting anyone! There are five acts, consisting of varying style (and difficulty) boards. Should you hit anyone, you will be jailed. You must then find a way out, and make your way back to the theate, where you can re-start the act.

Anubis’ Challenge is an action-based VR adventure game where you need to show your reaction and combat skills to withstand multiple waves of enemies.

Get drunk and have a blast in a whole new way! Play against your friends and climb the rankings to reach the top of the League! Come join the party in Beer Pong League!