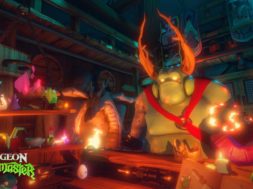 Welcome to the VR AND FUN Friday where we get to tell you about the fun and exciting VR games that have recently released for the HTC Vive. There are a bunch of new and exciting games ready for your to check out.

DBM is a magical VR experience with an emergent narrative seen through the eyes of the townships newest Brewmaster. You control the story through your choices. Brew potions and poisons for a variety of characters. Every brew has consequences that will reach far beyond the walls of the old tavern.

In the aftermath of being captured by the evil corporation he was trying to take down, Rick Slade died as an unwilling participant of an experiment to transfer consciousness to another host… or did he? Take down the corporation that did this to him. Welcome to Wanted Killer VR!

Number Hunt is a fast-paced VR Multiplayer FPS game with a mathematical twist. Have loads of fun, and battle it out with up to 3 other players to prove that your brain reigns supreme. You will be able to improve your math skills while you play

Acro FS is a recreational, stick-and-rudder flight simulator for high performance aerobatic aircraft. Fly an Unlimited-class aircraft at a desert practice site, or test your racing skills against the clock.

Imagine being the captain of a sturdy pirate ship and its jolly crew; now imagine all your crew, err, is made of dummies. Angry dummies on the brink of a mutiny. It’s up to you to put everyone to their place, so grab your flintlock pistols and be ready to face the dummiest threat of your seafaring career.

Fruit for the Village is a narrative VR incremental game set in a world torn apart by climate change and war. Out in the newly formed deserts, small villages struggle to survive in the new climate, working towards creating a new way of life.