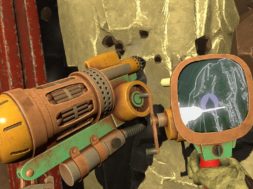 Is it possible to enjoy the weekend without new VR games? The answer is no, no, and…. no. There is no way around that question. So, we have compiled a fat list of new VR games you can check out this weekend on the HTC Vive.

Virtual Pirate VR takes you on an epic adventure as one of the most dangerous pirates of the sea. You’ll be armed with a pistol and cutlass to protect yourself from oncoming enemies. You’ll find tasks to be tough and even have a run-in with the legendary Kraken of the sea.

“Escape First” is a multiplayer escape room puzzle game for virtual reality. It includes 3 different escape rooms to choose from and can be played competitively, co-op or solo. You’ll be able to compete against friends and see who can escape the room first.

There are many creatures that lurk beneath the immortal mountains. One day, they decide to pop up and terrorize anything that lives upon it. They summon a magic tower to collect the animals’ souls and turn them into monsters. It’s your mission to keep the animals safe and protect the mountain. Good Luck.

VR Darts is a virtual reality e-sports game for darts enthusiasts focused on realism. Play local against AI or online against others.

The game takes place in a small town in an alternative western universe. Gear up with scrappy aftermarket tools and devices and jump into the elevator that will take you deep down into the mine. Find the rich veins that are just waiting for the honest, hard workers to whack their pickaxes at them!

Return back to the surface to enrich yourself! upgrade your tools to advance deeper. New tools open new possibilities for the brave worker: harder materials and more valuable treasures are waiting for you just behind the next block of granite. How much money is enough? Will you be able to stop? What happens if you don’t? The Answer to these questions and more lay at the bottom of the mine.

Wheelchair Simulator VR is a comedic game about a serious issue. Try to traverse the city by pushing the wheels with your hands and learn the story of a person who does that every day.

AMF VR is a PVP FPS game that delivers an action packed experience on an assortment of levels. You’ll be able to equip a variety off weapons and hunt down the enemy team.