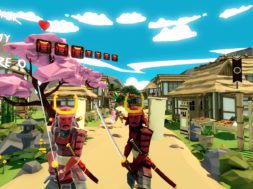 The first full week in March is now coming to an end. We’ve already seen some cool and exciting news about upcoming VR games this month but we need to go over the VR games that you can play this weekend.

Live the Guitar places you inside the rock-star lifestyle where you will be combining your guitar skills with virtual reality. As you progress through Live the Guitar you will become a genius guitar player who will join an upcoming rock band The Snuff. You will be part of the music industry with all its ups and downs.

The story is created using numerous cut-scenes which are based on real experience of the band. First, you will prove your self on a rehearsal to the band, then impress the audience on a club show, and after that, you will show your brilliant guitar skills on a big open-air festival.

Guns’n’Stories: Bulletproof is a dynamic VR western shooter that fully immerses players into the ambiance of weird Wild West. Stepping the tangled storyline, you will encounter many intimidating but comical enemies and fight Big Bosses.

Use motion controllers to destroy your enemies by weaving magic into lightning, fireballs, and other elemental spells. Chain combos and use different tactics against the hostile creatures. Make the game as challenging or as casual as you like with Fate Cards, and become the hero you’ve always wanted to be with powerful spells at your fingertips!

Become the virtual ninja that you were always chosen to be. You’ll be taking on countless samurai enemies using your shuriken and katana do defeat them. Not only will you be facing enemies but you will also be slicing and dicing different objects and animals. Get ready for an interesting new adventure.

Did I hear you’re not afraid of heights? Well that might not be the case after you play Epic Roller Coasters in VR where you will be taken to heights never reached before on a roller coaster. You will be going up, down, sideways in some extreme terrain. Will you feel some motion sickness? Maybe. But the thrill is here for anyone up for an adventure.

Designed from the ground-up with virtual reality in mind, Vision makes use of space and depth to provide a whole new music visualisation experience. Spectrum analysis and beat detection allow for all kinds of possibilities as colors, lights and shapes surround you, dancing to your music. Vision utilises a custom audio capture method, allowing it to play with anything that comes out of your speakers: Spotify, Pandora, YouTube, iTunes, musical instruments, even your own voice!