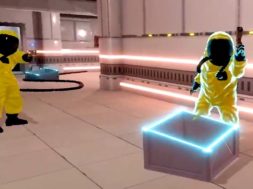 Can you believe it, the last week in March is already coming to an end. That’s right, we’re about to head into April of 2018 and there’s some exciting VR games that you need to check out today.

It is December, 1955. Your daughter has gone missing. Recurrent nightmares have been haunting your sleep, forcing a steady descent into madness. Your dreams bring about a variety of introspective, phobia-induced situations to wrestle with. And, something appears to be calling for you.. Downward…

Take command of the most advanced starfighter the United Trade Consortium has ever developed in stunning virtual reality as you battle for the Tartarus sector. Protect the UTC’s secret jump-drive technology from the Tartarus Liberation Front insurgents as you fight to maintain the corporation’s dominance and earn yourself fame and fortune in the process.

Trapped on a space station far above the earth is no picnic. To escape you need to solve various puzzles and challenges. Explore this zero gravity station and interact with your surroundings. Hidden clues and braintesing puzzles await you. Can you solve the puzzles and get home to earth?

Talk about a lot of space games this week.

So yeah, you get to touch this sexy devil anime character in VR which warrants some particular reactions from the character. Good luck, have fun.

Warbot is a VR fighting game by controlling robot through mapping mode. It’s designed and built for VR immersive experience, you have high freedom of assembly which allows you to create your own unique robot. Basically like Tekken mixed in with battlebots in VR.

In Combat Tested, you must escape from the lab where you are being held after being experimented on. Luckily, these experiments have left you with special powers that will aid you in your escape.