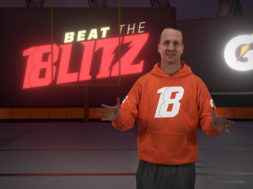 Can you believe it? It’s already March in 2018. That’s right, we are into our third month of the year already. My goodness does time fly by. But the good news to all this is that we get new VR games for the HTC Vive. Let’s jump in and take a look.

Escape the Shattered Plains is a short (20-30 minutes) interactive narrative adaptation of Brandon Sanderson’s best selling fantasy novel The Way of Kings. You experience the eastern coast of Roshar, where the land is savaged by highstorms, eroding away the earth and leaving rough stone formations. Almost all forms of life have a type of shell for protection but you are not as lucky. Kaladin’s fate is your own as you you step onto the shattered plains and…

Throughout the experience, Syl — a playful, fairy-like spren — will be there to guide and assist you in understanding your new powers as you explore your surroundings. In the the spirit of the ancient oaths;

Peyton Manning? Is that you in VR? Yes it is.

Gatorade’s Beat the Blitz is a free-to-play VR simulation designed to put your hydration to the test. Guided by former All-Pro quarterback Peyton Manning, you’ll battle against the effects of dehydration as you dodge blitzers in our high energy throwing skills competition.

Together with Peyton, you’ll also take a journey inside the human body where you’ll see, firsthand, how dehydration affects your performance, starting with the heart and brain. Then, you’ll have a chance to set new high scores in a challenge designed to make you sweat.

Beat the Blitz is one of the first football sims to use arm motion for ball movement, giving you a realistic experience in the pocket. And you’ll see how you stack up with a true-to-life sized hologram of Peyton by your side throughout.

Do you know the way? Well, you better figure it out quick if you don’t as you’ll be tested in the high alps in freezing conditions. This VR experience will take you back to 1940 where you become a French legionnaire in one of the last military hot air balloon to oversee the Hanoi bay and secure the area due to early independence riots.

You get separated from your ship and blown away by the winds. Unable to contact your base or control the balloon, you finally hit the Kawagarbo and get thrown overboard. Now equipped with two improvised ice axes your only chance of survival is to reach the top of this known sacred mountain and get back to your craft before the winds free it.

Yeah that’s right, you’re going to have to use your dogs to defend yourself from oncoming zombies. This is a tabletop tower defense game in virtual reality where you will place your dog companion in a tower to destroy the evil creatures. All I have to say is, wow, people are pretty imaginative with their ideas.

The VR game features a cartoon-like rendition of the famous Three Kingdoms era in China where users will have to slice their way to win the game. Kingdom of Blades playstyle mechanics resembles that of Fruit Ninja where you use your sword to cut down enemies in a fixed location.