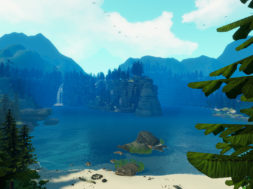 Is it Christmas already or are we just blessed this week with some new incredible VR games? It’s been an exciting week for us as there are many new titles available to play on the HTC Vive.

Oval takes your skills to a whole new level with thrilling and competitive multiplayer battles. Break your speed limit and go faster than ever without motion-sickness thanks to Oval’s unique technology. Create, share or play awesome community maps using the multiplayer level editor.

Catch & Release places you on a beautiful mountain lake and lets you freely explore and row around while you choose your fishing spot and take in the scenery.

Moss is a single-player action-adventure puzzle game and new IP from Polyarc tailor-made for the VR platform. It takes classic components of a great game—such as compelling characters, gripping combat, and captivating world exploration—and combines them with the exciting opportunities of virtual reality.

Are you ready to party in VR?! AHHHHHHHHH~

A jogging pig meets a delicious cake. Will he give in to temptation? Not while you’re watching! Google Spotlight Stories presents Piggy VR, a new level of interaction between character and audience.

mmerse yourself in a dark world, full of mysteries and unforeseen events. Escape punishment and restore justice in this atmospheric VR game.

Challenge your wits, test your mettle, prove you are worthy of a second chance by completing the riddles and puzzles of the Egyptian Gods! Escape from the ancient Egyptian tomb or seal your fate forever