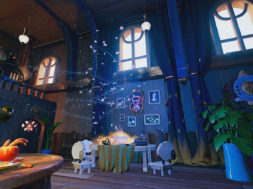 Welcome to June! The month of May has past by us so quickly and we’re already half-way through the year. Can you believe it? Today we present you with a new slate of VR games for the HTC Vive. Let’s dive right in!

Challenge your mind with puzzles based on optical illusions. Find the perfect angle by rotating the pieces to clean up the chaos. Exploring is key here folks.

Immerse yourself in the brilliantly crafted world of walking and thinking machines and the corpses, hungry for the living flesh! You will be able to choose one of four characters with unique abilities and take part in the dramatic events that happened at the Facility № 3826. Don’t be scared.

HEXION is a competitive VR multiplayer shooter, where you engage with other players using a wide array of unique weaponry and equipment. Well suited to the sneakiest, fastest or most accurate of players. Communication and tactics are key to your survival. So plan ahead, and execute with precision and ferocity.

Downward Spiral: Horus Station takes players through a lost vessel abandoned by its crew with a complete focus on visual storytelling for single player or two player online co-op. Players will have to piece together the plot through observation and interpretation as they navigate the derelict space station’s environmental storytelling.

Darkest Mana: Master of the Table is a card duel game. Create a deck and play online against players from around the world. You can also play solo in 20+ stages.

Irene, a 22-year-old archeology student, is contacted by her father, head of a secret government organization, to meet Professor Jindaal in his lab, intent on following in the footsteps of a strange scientist named Sholme. She is asked to go to the place where the scientist worked to investigate an ancient and unknown lost technology. At the entrance to the laboratory, however, something unexpected happens.

Cairo’s Tale: The Big Egg is a VR animated short about the adventure of young mage Cairo and his best friend Clusterclucked. You will enjoy this immersive experience.

In Along Together, you are a kid’s imaginary friend: their invisible companion when there’s no one else around and their guardian when things get dangerous. When their dog, Rishu, goes missing, they turn to you for help.

In Kingdom Watcher, players combine the best of skill and strategy for a calculating and intense battle against the Troll King and his army. Kingdom Watcher is the ultimate blend of tower defense and shoot ’em up, where you build towers to help protect your castle, and put your bow and arrow skills to the test against the waves of cute and evil enemies.

Fury Fighter VR – VR beat em up with procedural levels. Save your Girlfriend/Boyfriend from gangs.

Turn bully students into model students as much as possible and get the most points! And special character teacher and puppy appear to help you. Line these bullies up and teach them a lesson!