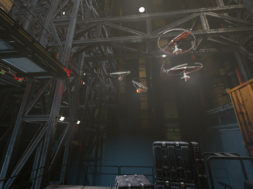 The last full week of July 2018 is finally coming to an end. But on that note, there are many new VR games to be excited about. Let’s take a look at some of the new releases on the HTC Vive.

Noan, a little boy nurtured by the Rebels, is the world’s only organic human and treasured as the true saviour of the world. June, 2081, the first large-scale battle between Government and Rebel forces, the Battle of the Caspian Sea, broke out. The Rebel relied on Noan to wantonly incite the people around the Caspian Sea to confront the government, who duly sent troops to suppress the dissent. The battle lasted for two months and ended with Noan being kidnapped by Government forces. In January, 2082, Major Miya was sent to rescue Noan. After some trouble Miya was recalled due to seriously injury, here our story begins…

Arrowborn is multiplayer Player versus Player VR Archery. Load your quiver with deadly magical arrows, ready your shield, then leap through the air as you loose barrages on your enemies from all angles.

In Soviet Lunapark VR you will be able to choose one of four characters with unique abilities: an engineer who can stop the time, a nurse who can tame the zombies, or try other crazy bastards. You will take part in the dramatic events that took place at the facility №3826 when everything went out of the control. Unless, of course, you can survive and not sink into the madness.