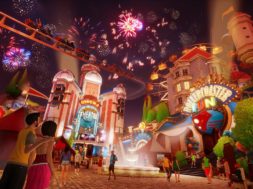 February is already coming to a close as it feels like time is moving too quickly. But don’t let father time stop you from having some fun in VR. Check out some of the new exciting VR games released this week on the HTC Vive.

Is there such a thing as too much fun? Well, there might be in Summer Funland where you get to go on some epic rides and adventures in virtual reality. You’ll find that gravity and imagination won’t be stopping us from having an epic time in the virtual park. Make sure to give this one a try.

Conquer is an action-packed combat game experience crafted exclusively for VR/MR . The story is set in age of ancient times where the players will explore the game’s dilapidated world, Kingdom of Yan , which is occupied by evil beasts, carrying the sacred gift of the gods to complete a quest against evil.

Konrad, the cute kitten, needs a helping hand and lots of love. You have to satisfy his needs and desires: Give him his cat food in the kitchen, put him in his litter box, let him take a ride in a hot-air-balloon and lots more!