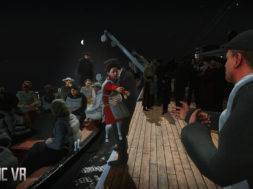 The weekend has finally arrived and it’s time to check out some new VR games on the HTC Vive. There are some awesome releases this week so let’s take a look.

Jogging is a softer alternative to running and is one of the oldest and most popular forms of aerobic exercise. It can help you burn calories and strengthen muscles as well as improve cardiovascular fitness. Jogging is also a great way to help lower your blood pressure and relieve stress. It helps put you in a more peaceful state of mind and helps promote an upbeat attitude. The WHO recommends that adults aged 18 to 64 years should get in at least 150 minutes of exercise a week. That can be hard to accomplish with today’s busy lifestyles!

Diving to the bottom of the North Atlantic, you take on the role of Dr. Ethan Lynch, Associate Professor of Maritime Archaeology at the fictional University of Nova Scotia. With funding from a mysterious investor, Dr. Lynch and his PhD Candidate Jean Robinson have set out aboard a research vessel to dive the wreck of Titanic and answer questions that have remained submerged for a century. This game allows you to explore the shipwreck inside and out and recover items and complete missions such as recovery of a downed ROV, Documentary Film Making and the creation of a photomosaic.

Orch Star is a real-time strategy game set in an immersive space universe where orchs and elves fight for domination. Control your fleet of orch ships using either a traditional desktop setup or VR gear as you conquer the planets necessary to seize control of strategic systems.

VROOM KABOOM is a brand-new type of gameplay experience. A “Tower Rush with Vehicles”, this game combines elements from collectible card games, tower defense and multiplayer online battles. With a wide variety of physics driven vehicles, VROOM KABOOMis a crazy mash up of emergent action gameplay and tactical choices. Engage in 1v1, 2v2 or 3v3 battles and even take to the roads in our full featured VR mode!

Lucky Night: Poker Games is a VR multiplayer online poker game. Have the most impressive Blackjack and Texas Hold’em games in the world of virtual reality.