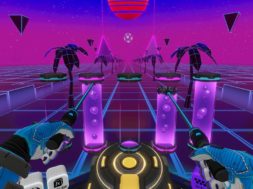 The first full week of August is now slowly coming to an end. And with the weekend upon us, it means its time to play some new VR games. Check out the list below on some exciting new VR titles for the HTC Vive.

A VR metaphor for life, Museum of Symmetry takes the player through landscapes of earth, fire, wind and water, where vivacious 2D characters live in a 3D playground. Museum of Symmetry disrupts conventional game storytelling to create an unexpected pleasure-positive trip in VR as never experienced before.

How long can you survive the Viking Days? The ultimate Viking simulator trains you until your beard can reach the floor. Be challenged by every day normal situations of a Viking! Inspired by games such as WarioWare and Job Simulator, interact with the environment and be a real Viking.

It is time to go inside those old arcade machines and become the ultimate pilot. Grab your VR headset, a pair of motion controllers and get ready to take loads of passengers all around the world in a VR experience like no other.

Pilot Rudder VR takes all the nostalgia for the old “how-far-can-you-go” arcade games and transforms it into an all new immersive adventure where you have full control.

The next chapter is here. New York is in grave danger in the follow up to Ghostbusters VR! Act 2, Showdown, is a fast paced VR shooter where you’ll use your Ghostbusting skills to fend off a legion of New York’s finest ghouls. Blast your way through and face a thrilling VR showdown with the most threatening Marshmallow you’ll ever roast.

Immerse yourself in an interactive sonic environment where you build, drop, remix, and jam with your friends and top artists. Create songs, crush sets, and express yourself like never before. Electronauts sets the stage for you to DJ, perform, and make music magic in virtual reality.

Ding Dong VR is a neon-infused one button arcade game. It is an addictive ‘just-one-more-round’ score chaser adapted to be played in Virtual Reality.