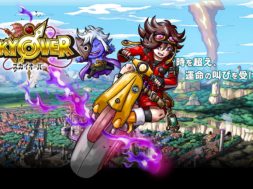 The Tokyo Game Show (TGS) is one of the largest gaming conventions in Asia. Companies such as PlayStation and HTC Vive will have a large presence at the show with many surprises in store. There will also be many smaller companies present at TGS such as Exys who are looking to make a big impact on gamers. And according to Exys’s website, they will be demoing a new title called Skyover VR which stems from their prominent franchise.

Skyover is a popular mobile RPG game in Japan that features a plethora of heroes who fight against an evil empire. The game shares the same team as its predecessor, which includes the scriptwriter of the anime series Blue Exorcist and Gantz – Yusuke Watanabe (渡邊雄介). Also, Japanese band Noisemaker produces its theme song – Sora. The game tells the story of Totto (CV: Yuki Kaji) who will fight opponents in his adventure.

While not much else is known about the upcoming VR experience, we were able to find a short muted trailer showing how the content will be portrayed. According to Exys, “You can experience the world view of the dramatic spacetime RPG “SKYOVER (Sky over)” in VR.

In the trailer you can see some of the main heroes battling what appears to be a dragon. Skyover VR looks to have comic-book like graphics and the heroes seem to be using all sorts of magic spells to take down the dragon. Exys has yet to announce which platforms the game will be available on. Stay tuned as we deliver further updates about Skyover VR.

tags: exys skyover vr tgs tokyo game show
previous VR Karts Allows You To Drive And Destroy Your Competition In The Virtual World
next Onward Is Playable For Free This Weekend With 20% Off The Game
Related Posts