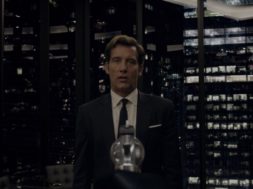 Netflix is quickly becoming the alternative solution to cable networks with the release of all their original content. The company has been focused on creating shows and movies that revolve around sci-fi and mysteries. Most recently, they’ve released a Netflix original movie called ANON which explores what society looks like dictated by augmented reality (AR).

Sal Frieland is a detective in a world with no privacy or anonymity; where everyone’s lives are transparent, traceable, and recorded by the authorities; where crime almost ceases to exist. But in trying to solve a series of murders, Frieland stumbles on a young woman known only as the Girl. She has no identity, no history and is invisible to the cops. Sal realizes this may not be the end of crime, but the beginning.

Without giving too much away, the police in the future have the power and authority to see from your perspective. They can login to your memories and see exactly what you’ve seen. In addition, they are able to pull up any information in their surrounding area with a quick glance of the eyes.

Whether its an immobile object or a human, it provides digital information and descriptions to everything; similar to how the Google Glass was supposed to work. And instead of using any sort of HMD, the AR technology is physically engrained into your brain.

From this point on we are going to get a little more in-depth. If you’ve seen the movie then you can continue to read.

What the most interesting part of the movie is how they were able to manipulate the technology to go beyond what AR is capable of today. They use both AR technology and biotechnology to bypass our privacy and look at the world with full transparency. This is about as “Big Brother” as it gets which is quite scary. Seeing authority figures having one click access to our minds is a daunting thought.

What’s also interesting is the fact that hackers can digitally overlay our whole visual perception of the real world. Not only can our eyes be accessed but they are able to pull references of anytime and project into our minds in real time. They are able to trick our minds into thinking that something else exists through digital projections.

It was almost too scary to see how Sal Frienland was trapped in his own mind after the hackers accessed his private database. They were able to bring is worst nightmares to life over and over again. Whether it was filling his house with rats or replaying videos of his son dying, the thought of AR technology is the wrong hands becomes a hellish scenario. Friendland goes on to express how “I can’t believe my eyes” actually becomes a literal term.

While the movie lacked the climax towards the end, overall I enjoyed the movie and was intrigued by how the director Andrew Niccol (Lord of War, In Time, The Host) imagined what AR technology can look like in the future.