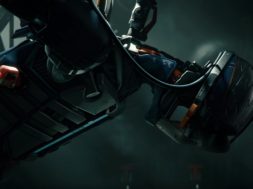 During the Unite Austin 2017 event, Neill Blomkamp was brought on stage to talk about his experience in working with Unity’s platform to create his latest short film called Adam: The Mirror & The Profit. This story takes in place in a futuristic world where AI robots leave a prison to head into a dystopian society.

The prisoners are led by a mysterious figure into a warehouse where they meet a psychic being. She is able to tell each AI robot their crimes and what they’ve done wrong. The showcased video is 1 part of 2 videos for the story. The short film itself was created using the new Unity 2017 platform which shows the strength of the core engine and software.

Last year, Unity released the initial video where it shows the prologue to the Adam story. It features the prison, protagonist, the prison guards, and the geographical environment. If you watch the video, you can see the incredible amount of detail that went into making this short film. When they built this film in Unity, they actually used real-life actors and real structures.

Make sure to stay tuned to see the next parts of Adam.